I adore Larches… the first time I found out a conifer could blow it’s needles and enjoy a winter silhouette I was hooked. Then I saw the Nick Lenz Larches at the Pacific Rim… one of which ranks as one of my favorite bonsai of all time. There’s something so perfect in being able to appreciate the chartreuse glow of new foliage on a early spring evening that I find captivating.

So needless to say we have a few in our collection, and one that I’ve always enjoyed having was one I picked up a few years ago. It was started from seed to be bonsai, and was originally a workshop tree that apparently Daniel had helped style initially… then much later it came to me in 2009. I liked it because the lines reminded me vaguely of the Lenz Larch at the Rim.

I ended up working on this larch the same day Eric was working on his new larch shown in the post before this one. I was enjoying the April sunshine watching Eric work, and I kept looking at this larch. I had some heavy copper wire that had to come off of it that had been there since we got it. It had been loosely applied, but it was now time to come off. I actually had to buy a pair of mini-bolt cutters to get it off, since traditional wire cutters just weren’t going to cut it. After I got it off, I had an opportunity to evaluate the tree in a whole new way, because I could move major branches. I looked at Eric and told him not to get any ideas about it, because I saw what I wanted to do with it. He suggested I just get on with it… and so I did.

So three years of development and a half dozen guy wires later, and we have this……

Needless to say I am deeply delighted with how it looks, and when I dug up that older photo, I was surprised at how much it had developed in that time. We’re so close to our trees sometimes, it’s hard to really grasp how much they change under our care in so short a time.

I hope you enjoy it as much as I do… and the moral of the story is, in whatever way you can… photograph your trees even if you don’t think they look like much, you’ll be glad you did later.

Recently I worked on a large Korean Hornbeam of Daniel Robinson’s (my teacher) at Elandan Gardens, this is the story of that tree, through a few images. For those of you familiar with Elandan you will have doubtlessly seen this tree in the collection where it has lived for a great many years. I fell in love with this tree (actually all the hornbeams) from the minute I set foot in the garden. They are such a spectacular species and this tree is certainly no exception. Much of the deadwood had weathered and changed over the years and excavating what was left behind was a wonderful distraction between hours of focusing intently on little tiny branches.

This tree took me about 16+ hours to wire over the course of about 3 days. I gave it a break for a few days during the work week and finished it just before heading to bed on Monday.

This was a tremendous amount of fun as always. I never tire from the transformations, of a twig, a branch then a tree. It makes me fall in love with bonsai all over again. I hope this helps show how important it is to do detailed wiring. This is the only way to get those amazing ancient crowns.

I hope you enjoy … please feel free to comment as always  …

With the last bit of fall color: 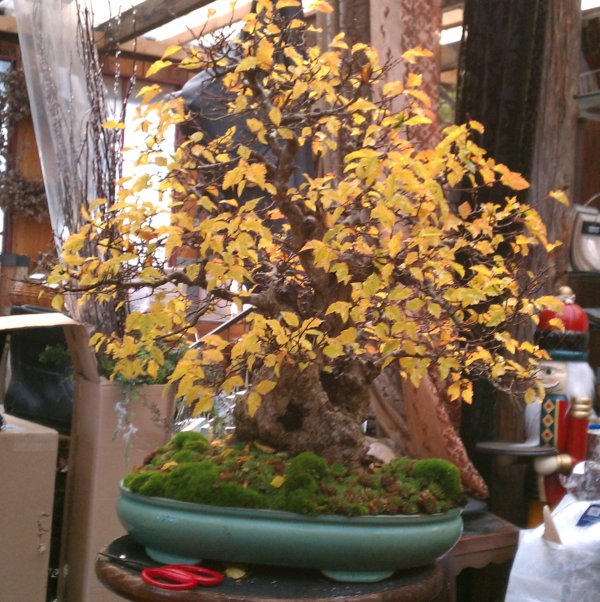 After removing the leaves: 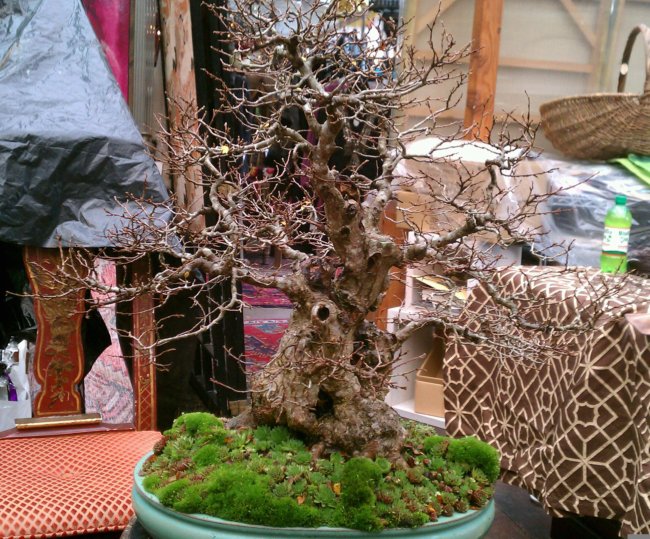 After many tedious hours of fine wiring:

I am currently working another large hornbeam from the collection and hope to have it completed soon. I will post a more detailed progression of it’s change in the coming weeks.