As you might remember from Arrival of a Larix we received this larch some time ago. I finally decided to set out to work on it this Saturday as it was a nice day out and this guy was just looking like he needed some attention.

A quick review of how the tree looked before work began.

The first order of business was to begin working on the deadwood that is on the tree. The current state of the deadwood was a little spiky and out of place. I began by reducing the height of the main deadwood section. As I began sculpting the deadwood I discovered that parts of it had become punky and moisture was beginning to eat away at the base. This is of course a major concern when there is deadwood that reaches to the soil surface. The punky wood was removed using the die grinder and the rest of the initial carving was completed. The wood will be preserved using lime sulfur that has been diluted and had ink added to it in an effort to reduce any stark contrast in color.

After the initial carving was complete I was able to begin working on changing the structure  of the tree. As you can see in the above image the initial image was that of a young tree with strong apical growth and the foliage pads were very linear and flat. These were two of the most important aspects that needed changing to help portray the look of an ancient conifer. The good news is that larches in particular are very flexible and forgiving offering the artist a great deal of latitude in the placement of the branches.

The tree was heavily thinned and compacted to help create a tighter more masculine image and to evoke more of the alpine shape that would be natural to this tree in many surroundings.

The image after styling. A different front was found that showed off the deadwood better and provided a much more interesting focal point.

With the initial styling complete the tree will be allowed to recover. The next steps are to create more definition and interest in the deadwood as well as to create more ramification in the branches. Refinement of the overall image will take probably the next 2 to 3 years.

Today our good friend John Conn delivered a tree to us that we had recently purchased. It happened by chance that he would be at the nursery where the tree was and he was kind enough to offer to bring it with him upon his return. Just today the tree was dropped off and we got our first chance to see it in person. A delightful tree with great potential!

A small cell phone picture taken of the tree by me. Vic took some much better images with the big guns but I wanted to share this early image with you all. No work as of yet, but soon. 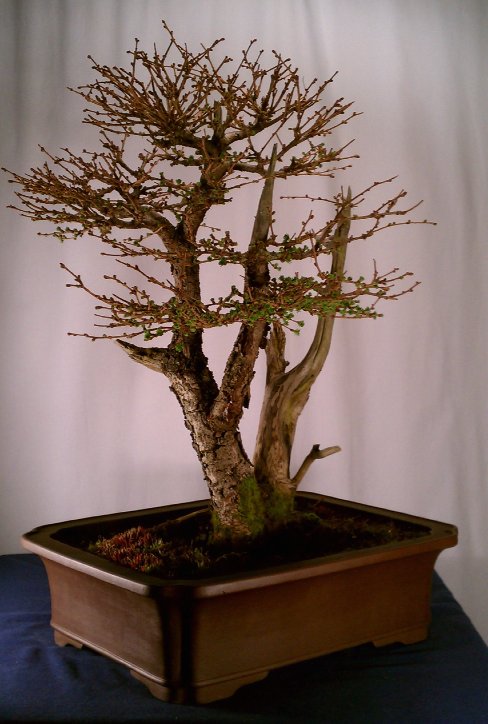 (This story is a re-post of a thread from several years ago [2009]. I believe it is still relevant and hope you all find some value in it.)

Since my friend grouper52 suggested that I post some pictures of the AYC (Alaskan Yellow Cedar – Chamaecyparis nootkatensis) I have been working on I decided I would take him up on that.

I got my wife to take some pictures of its current state. These are such wonderful trees to work with. They are extremely flexible and can be wired very easily. Long branches can be shortened and gnarled to create the ancient image of a tortured tree.

This particular tree is still in the process of being created so many of the jins haven’t been carved and some of the branches need to be removed. Foliage needs to be reduced and developed as well to support the image. I thought however you might enjoy to see a before picture and a few afters of its current state. The carved sections are best viewed from above but due to the angle we had the tree setting the best views of it aren’t entirely represented here. Some of the sections need more attention/ smoothing to reduce some of the burrs etc. Detail work may be done at a later date to complete the design of the deadwood. I also have plans to create another deadwood section higher in the tree to continue this ancient look. For those that may be wondering I did not kill most of this area instead it died back from sunscald and thus presented this great opportunity. Which of course turn out to a wonderful silver lining, giving this tree an undeniable focal point.

I hope you all enjoy.