A few years ago , three to be precise, I took a workshop with renowned Canadian collector David Easterbrook at the PNBCA convention in Vancouver, BC. He was working with some American Larch (larix larcinia) that he had collected in the wilds of Canada and I took the opportunity to acquire one of these special trees. Trees for the workshop were selected by way of raffle and as anyone who knows me knows I don’t generally do so well. [my wife on the other hand does great, go figure]

The tree I landed on wasn’t the largest trunked of the bunch and was more literati in its configuration. It seemed it was going to be a challenge to work with in creating a decent design, in other words it was right up my alley. For a moment I was a little concerned until I realized what was there. As the workshop began David walked around helping people to find the tree in the material, but I knew right away what I wanted to do. By the time he got to me I was well prepared to show him what I had found and after looking over the tree and turning it and looking from many angles David concluded I had indeed found the best image for the tree.

I didn’t work on the tree too much in the workshop. I had found its image and I was happy. I did perform a major bend using the bright orange bailing twine that is so iconic of work at Elandan. In the picture below you can see me and David discussing the bend I was going to perform, to tell the truth I don’t think he thought I could do it. The branch needed to be bent severely to bring the foliage at the end around to the front of the tree. While wrapping the tree and applying that large gauge wire required for the bend I continued to listen to David giving advice to the other workshop members. This advice turned out to be great and was well worth the workshop alone.

Larch at PNBCA workshop before any work began. photo by John Conn

I’ve taken my time with the larch and enjoyed keeping it healthy and lush. As we know from the seven stages of bonsai it is extremely important to work on healthy trees to get the most out of them each year. The first year with this tree was spent letting it grow strongly to set the few major movements that I added and to heal the large bend I made in the side branch. Being larch is extremely flexible and with the tree growing well that year it healed and had set by the next spring. It was then moved and potted into the pot you see it in the below pictures. After collecting the tree David had placed it in a large tub with pumice surrounding the original soil. Having let the tree grow strong for an additional year before potting it allowed me to remove almost all the original soil. It was potted into this pot not for show but as a suitable solution for the time being as it was the best size to allow the tree to grow freely for an additional year. The tree was potted into free draining bonsai soil and watered and fed well to encourage more growth. No additional design work was performed.  The tree grew marvelously and has filled the pot with roots. Last fall some carving work was done on the large deadwood section at the base (you can see it under David’s elbow in the above picture) more detailed work will continue.

A few days ago, as spring was getting all sprung, this guy started to leaf out. It comes out a little later than its Asian counter parts but that blue green foliage is so very much worth the wait. I took the next step in wiring this tree and placed some more of the large foliage areas while reducing some of the unneeded extensions as well. I’ve been back and forth on which side I like the best, but for now this is the front. I will be removing the left section of the tree sometime this year, it however is currently being left on to encourage a little more strength in the tree. This winter will see the fine wiring and next step to that final refined image.

Larch after three years of patient slow work. Left side will probably be removed.

As always comments, questions and discussion are always welcome and encouraged.

So when I am not playing with trees… frankly, I’m photographing them. So here’s some photos for you to enjoy. 🙂 These are a selection of trees from our 2010 regional convention that our club hosted. This first one is a Bougainvillea that Daniel gave to Eric and I as an engagement present. It was a raw stump when he gave it to us… 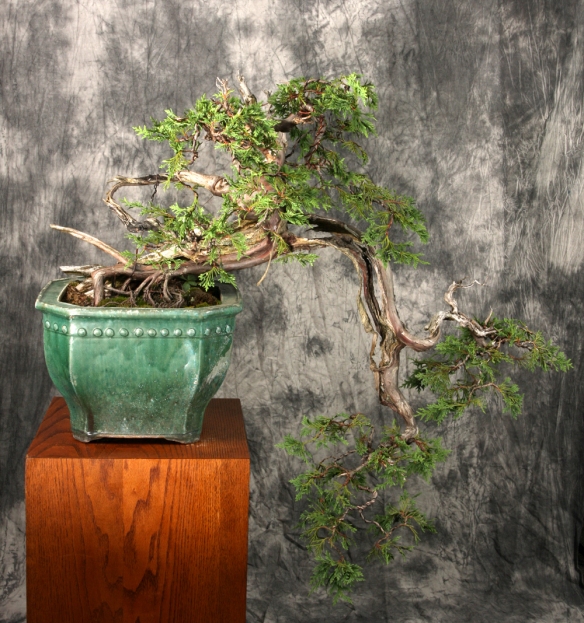 This last one took home the prize for best of show…